Before opening Mercato, Greg Norkus  managed restaurants in Long Island, Cleveland, and Charlotte. He was on the faculty of Cornell’s Hotel School for over 30 years and was an adjunct faculty member at the French Culinary Institute in New York for eight years. 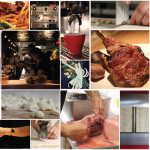 Kate Norkus brings to Mercato two decades of experience as a pastry chef, including 10 years as a team leader at the Wegman’s bakery department. Kate also co-managed the family’s restaurant on Long Island.

Lindsey Norkus formerly managed The Height’s Casino, a private club in Brooklyn, New York, and has worked at area establishments such as John Thomas and Dano’s on Seneca. He  is a graduate of Cornell’s School of Hotel Administration.